This is a revisit of OAuth from two perspectives, the first in that it was under consideration for the MashMyData project and the second, because this is looking at using OAuth with MyProxyCA, something already exploited with the CILogon project.

MashMyData explored solutions for delegation in a secured workflow involving a portal, an OGC Web Processing Service and OPeNDAP.   The aim was where possible, to re-use existing components a large part of which was the federated access control infrastructure developed for the Earth System Grid Federation.   ESGF supports single sign-on with PKI short-lived credentials but we had no use case requiring user delegation.  When it came to MashMyData the traditional solution with Proxy certificates won out.   So why bother revisiting OAuth?
There are a number of different ways you could apply OAuth.  Here we're looking at MyProxyCA, a short-lived credential service (SLCS).  Usually, a user would make a request to the service for a new credential (X.509 certificate) and authenticate with username/password.  Applying OAuth, the user gives permission to another entity to retrieve a credential representing them on their behalf.

There's a progression to this solution as follows:
2) Has been developed for CILogon and there is also MyProxyWebService.  This is how 3) could look: 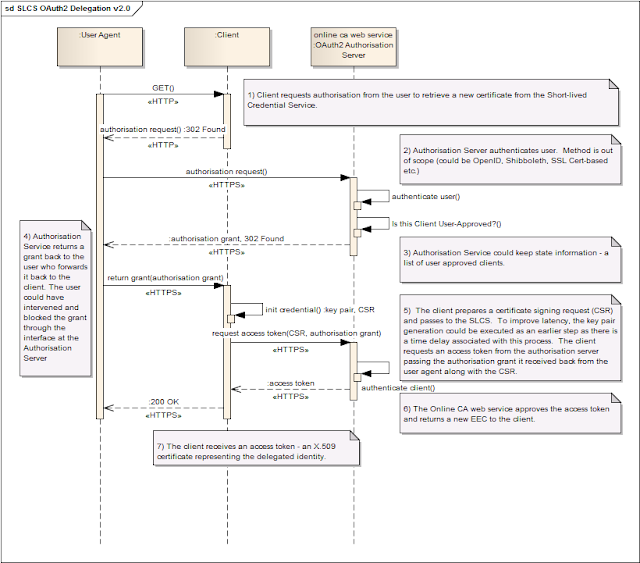 The user agent could be a browser or command line client or some other HTTP rich client application.  The OAuth 2.0 Authorisation Server is implemented in this case as middleware fronting the online CA.   The user must authenticate with this so that the online CA can ensure that this user has the right to delegate to the client.  I would envisage it also keeping a record of previously approved clients for the user so that approvals can be made without user intervention should they wish.  I like this ability for the user to manage which clients may be delegated to offline of the process of brokering credentials.

Once the client has obtained an authorisation grant, it generates a key pair and puts the public key in a certificate request to despatch to the online CA.  The latter verifies the authorisation grant and returns an OAuth access token in the form of a new user certificate delegated to the client.  The client can then use this in requests to other services where they need to act on behalf of the user.  A big thank you to Jim Basney for his feedback in iterating towards this solution.

There is the question remaining of the provenance of credentials: how do I distinguish this delegated certificate to one obtain directly by the user?  With proxy certificates you at least have the chain of trust going back to the original user certificate issuer and the CN component of the certificate subject name added for each delegation step.  For ESGF, we added in a SAML attribute assertion into the certificates extension for issued EECs.  There's a profile for this with VOMS which we hope to adopt for Contrail and the same idea has been used elsewhere.   I'd like to be able to express provenance information in this same space.  I would think it would likewise be as an attribute assertion but it needs some more thought.  The certificate extension content could be extended with additional SAML to meet a couple of other objectives: